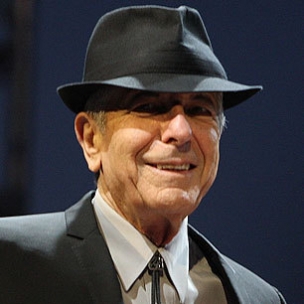 first album of new material in eight years takes place in the wee small hours. Tempos are at a kingsnake crawl and the sound is full of caresses, variations on the classy but louche cabaret tunes Cohen once dubbed the European blues. The vocals and music unfold in a whisper, and each cut waits tremulously for the dawn, with no guarantee that this time the darkness will not be permanent.
The first words belong to God himself, who wants to have a talk with Leonard, that "lazy bastard living in a suit." Cohen, it seems, has been busy trying to write his love songs and manuals for living with defeat instead of delivering God's message, which is all the 77-year-old has been put here to do, and which is: Time to go home, a trip you make naked and burdenless to a place better than this one.
And th-th-that's all, folks! Three minutes and 50 seconds, titled "Going Home," sum up the story Cohen has been telling since he first left poetry for music in 1967 (after 11 years as Canada's most famous poet, he was 33 and thought the money would be better). When Cohen calls this album Old Ideas, he means not just that these are the thoughts of a septuagenarian, but that he's been turning over these cards for a long while: sex, love, God, and the way the three can be shuffled to relieve the pain of existence. A Jew who disappeared up a mountaintop to ponder Zen Buddhist koans, Cohen has sought rapture anywhere and everywhere he can find it – prayer, LSD, the thighs of a woman – and tried to unite the spiritual and the physical since he first made a sensation with a song about a girl named Suzanne, who touches your perfect body with her mind.
Dylan dreamed he saw St. Augustine. Cohen has walked the earth trying to be St. Augustine. He has never made a pretense of his confessions being anything other than personal – there really was a Suzanne, just like there really was a Marianne. But as time has gone on, Cohen has shorn the ornament from his language to move from the personal to the universal. The lyrics on Old Ideas reach for the stark power of prayers, hymns and religious riddles. The music is just as basic: a keyboard or guitar breaks the stillness, a drummer tries to simulate a Casio rhythm box, backup girls offer comfort to the weak, a stringed instrument gives a final blessed


The song titles tell the story: "Going Home," "Amen," "Darkness," "Crazy to Love You," "Come Healing." His basso profundo cracked by both the frailty and the wisdom of his years, COhen holds forth on the forces of love and forgiveness, and those of hate and darkness. Which ones will win is a given. What it means is still up for grabs. In an album almost empty of imagery, it stands out when, toward the end, Cohen describes watching "a broken bajo bobbing on the dark, infested sea." It's been carried there by the waves, maybe off of someone's shoulder, maybe out of someone's grave. Some New Orleans horns swell in the distance, neither mournful nor celebratory. Just there. As if to say: life or death. It's up to you. The music goes on Rollingstones.com
Posted by The Tube at 07:29