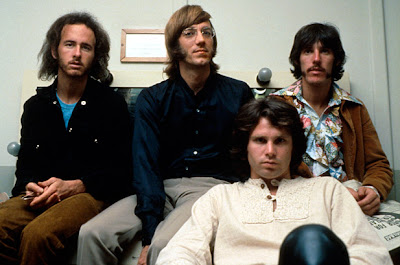 As the Doors begin The Year of the Doors with a 40th anniversary release of "L.A. Woman" and an accompanying documentary, keyboardist Ray Manzarek says he hopes to spend more time "Breakin' a Sweat" in the future.

"Breakin' a Sweat" is the surviving group members' collaboration with Skrillex for the upcoming Re:Generation Music Project film, which debuts in theaters Feb. 16. Manzarek says the session "kicked me in the ass" and tells Billboard.com that it also inspired a few ideas for more Doors involvement in the electronic music realm.


"Breakin' a Sweat"
"We might do some stuff in that direction," Manzarek says. "What I'd like to do and what might happen is to do some electronic treatments of the songs, of the multi-tracks we have, Robby (Krieger) and I working with different people. That would be a lot of fun. That's the new realm of music, electronics. Electronics can go anywhere, so that's what I'm looking forward to in the future."

Manzarek says the Doors were asked to play "Breakin' a Sweat" with Skrillex on this year's Grammy Awards telecast, but the plan was nixed by drummer John Densmore, who plays on the track but remains in "virtual total incommunicado" with his estranged bandmates. But the keyboardist is confident that the late Doors frontman Jim Morrison would approve of adapting the Doors' music in that manner. "He'd love it. He was no purist," Manzarek says. "His words were his mileau. He might be, 'Don't f*** with my words,' but he'd be open for all kind of improvisations. He loved that stuff."

While they wait to see what that future brings, Manzarek and the Doors camp will bring out the new version of "L.A. Woman" and the home video version of "Mr. Mojo Risin': The Story of L.A. Woman" on Jan. 24, with the film premiering Friday [Jan. 20] at the Egyptian Theatre in Hollywood. The album includes a second disc featuring studio chatter and alternate versions of seven songs, plus a pair of new tracks -- "She Smells So Nice" and "Rock Me," recorded together as a medley -- discovered by co-producer Bruce Botnick, who helmed the anniversary package.

"That's buried treasure, found treasure," Manzarek says. "Nobody remembered doing the song. Bruce found it in the outtakes; he listened to everything and said, 'Hey, there's a whole new song here' We said, 'What?' We went down to hear it and it was like, 'S***!' Nobody remembered recording it. It was a total surprise for the Doors, for Bruce Botnick and hopefully for the fans, too."

Manzarek describes making the "L.A. Woman" projects as "very nostalgic" -- and emotional. "It brings a tear to your eye to hear our brother, man, to hear that last session, to hear Jim in a sort of whiskey growl...And seeing him is like, '...there's my brother, man. He ain't gonna be on the planet no more.' It's very moving."

Manzarek is mum on what else The Year of the Doors will hold, though he does acknowledge there's "a bunch of stuff cooked up." But he doesn't expect any of the group's other albums will be treated in quite the same archival way as "L.A. Woman."

"I don't think there's enough outtakes, unfortunately," he explains. "We never had a lot of outtakes, really. We went into the studio and did three or four takes and knocked it out and knew what we were going to do. And any outtakes are invariably lesser takes and don't hold anything interesting unless you want to hear Ray Manzarek flub a solo. If that's what you're looking for, we have that, but I can guarantee you don't want to listen to that."
Posted by The Tube at 06:42