When Nickelback released its new album, "Here and Now Download," in November, drummer Daniel Adair promised the Canadian rock quartet would "bring our biggest, baddest, most over-the-top show yet" to the road. And as the group prepares for the tour's April 10 launch in Moline, Ill., it's apparently delivering on that promise.

"Put it this way -- the artist rendering didn't do it any justice. This thing's huge," bassist Mike Kroeger tells Billboard.com. "It's massive and it's gonna be a very hard-hitting show. We're really excited to get this in front of people." Kroeger says he finds it difficult to describe Nickelback's production -- "It's going to be a lot easier after people see it," he notes -- but he adds that it's "big and impactful" and loaded with special effects. "Everything is there. We've got a whole bunch of really cool show element ideas with regards to lighting, to video, to pyro...There's things people haven't done yet. I didn't think that kind of territory was still available, but it turns out it is."Billboard 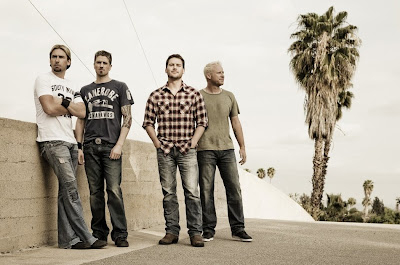 Kroeger acknowledges that Nickelback purposely waited a few months after "Here and Now" came out before taking the new material on the road. "We did that on the last record (2008's "Dark Horse"), too," he explains. "If you get out there too early, no matter how good it's doing, people don't all know about it yet. You've got to give the world a little time for it to soak in out there. Even our biggest fans sometimes don't know right away, so you've got to give it time to seep in out there and get disseminated to everybody. Then you go out."

"Here and Now" debuted at No. 2 on the Billboard 200 and has been certified gold, and it also topped the charts in Canada, where it's double-platinum. Nickelback plans to be on the road into 2013, with the North American leg ending July 30 and a European stretch beginning Sept. 7. Trips to Australia, the Pacific Rim, Japan and a possible North American return are expected to follow.

Meanwhile, Nickelback has released the next two singles from "Here and Now." Following last fall's patter established by "When We Stand Together" and "Bottoms Up," the group is putting out "Lullaby" for Pop and AC formats and "This Means War" for rock outlets. "It's really more a function of the kind of landscape that's out there in radio than the audience," Kroeger says. "Our M.O. used to be that we would put one of our songs out to rock radio and it would play there and then it would move on to pop or Top 40 or whatever. It was a great arrangement, but it's not like that anymore. There's no cross-pollination between rock and pop anymore, so you have to be dual. You can't be both of those (formats) with the same song anymore, so we just recognize that and go with it." The dual single trend is likely to continue, he says, though the group hasn't "had any formal discussions" yet about which songs will get the nod.


The "Here and Now" campaign has also been marked by some pronounced anti-Nickelback sentiments, including insults slung at the group by Black Keys drummer Patrick Carney. Nickelback, which usually ignores the slams, has taken to responding with witty, tongue-in-cheek tweets, and Kroeger says he hopes the remarks let those on both sides of the fence know Nickelback doesn't take the hate to heart.

"We've just decided we're going to have some fun with it, too," he says. "We try to aim for the humorous side and have a little playful banter. I would imagine that for somebody who is trying to get us to be upset or our fans to be upset it must be tremendously frustrating to learn we actually don't take it seriously at all and we're just having a good time doing what we do."