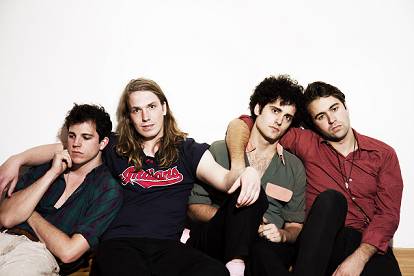 The Vaccines' DownloadJustin Young has revealed that he has "too many songs" for the band's second album.

Young, who told BBC Radio 1 that they were halfway through recording the follow-up to their 2011 debut 'What Did You Expect From The Vaccines?', said that he had been worried the band would be scrabbling for material but had already completed three new tracks titled 'Teenage Icon', 'No Hope' and 'Bad Mood'.

The singer – who also said that they would be playing the new songs live – said: "They are all done and they're going to be on the record because we love them." He then added:


I was really worried going into the second record that it would be a case of not having enough songs but the thing that's keeping me awake at night is having too many songs, which is no bad thing.

Previously, Young told NME that he was eager to start work on the band's second LP as soon as possible. "We can't wait," he said. "When you're in the studio, you just crave the road and getting out and playing shows, but we've been touring for the last 18 months so we really just want to get in and make a record."

You can watch a video interview in which The Vaccines discuss their plans for the new album by scrolling down to the bottom of the page and watch Video.

In addition to their studio sessions, The Vaccines have a busy summer of festival appearances, with slots at Reading and Leeds Festivals, T In The Park, Chazzstock, Isle Of Wight Festival and Benicassim among their bookings.